As family homes go, the drab old farmhouse left a lot to be desired. Its plain, unassuming frontage of grey weathered pebble-dash and head-thumping low doors were more ‘function than form’ and after years of being tenanted it was in serious need of some tlc.

But Tom Warburton had always dreamed of breathing new life into his family’s inheritance and when the opportunity arose in 2008 he jumped at the chance.

‘The house became empty when the tenant passed away and Anna and I had always wanted to take it on board,’ he said. ‘I grew up close by and it had always been at the back of my mind that one day I would like to live here, so I was delighted to get the chance.’

By this time Tom had moved to Darlington, met and married Anna, and had a young family of his own, but they had always planned to move back to Cumbria. The first stage of their return was the conversion of an empty field barn on the family farm. Tom managed the project ‘long distance’ from their home in the North East until it was ready for them to move into. They lived there for five years but had started to outgrow the compact property when the old farmhouse became empty.

‘The timing was right for Tom and Anna to start another renovation – and they knew exactly who they wanted to help them turn their plans into reality.

‘We met Andrew Yeats and Lucy Nelson from Eco Arc a few years before at a mutual friends house in New Zealand,’ said Tom. ‘After that meeting we knew we wanted them to design our house one day. We really liked their eco philosophy and knew they would create something far better than we could ever dream of ourselves.’

Eco Arc wasted no time in coming up with a design which would completely alter the dynamics of the farmhouse and almost double its footprint. They carried out a digital survey so they could scan the property’s irregular dimensions into a computer and drew up plans for a two-story extension and single story glass and timber wrap-around – even though it would mean filling in a 15-meter deep well and moving a telegraph pole which were right in the middle of the proposed development.

After a few compromises – including the scrapping of a proposed garden roof – their plans were passed ahead of a nine-month wait for the builder to become available. 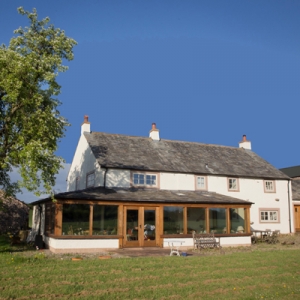 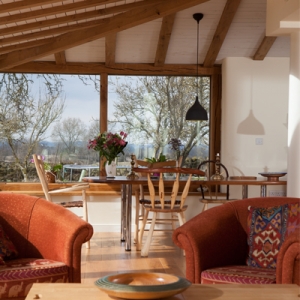 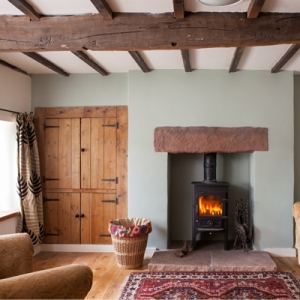 ‘Tom took a step back with this house because he had managed the conversion of the field barn, so I took it on board,’ said Anna. ‘We agreed to wait for Dave Arnison, the builder, because he is a local legend and we didn’t want anyone else. He was worth waiting for. We can’t praise him and the team highly enough.’

Between them, Anna and Dave launched into the renovation based on Eco Arc’s carbon-neutral vision for a sustainable family home. The first task was to fill and cap the 15 meter deep well with two lorry loads of hardcore. Then the farmhouse, which had been built onto bare earth with no foundations, was stripped out and the metre-wide walls underpinned. The floors were dug out with a pickaxe by more than a foot to allow for the underpinning, 100mm of Celotex insulation, dpc and underfloor heating, and all the soil was barrowed in the garden. To improve energy efficiency in the old part of the house, the walls were also dabbed and dotted with 75mm of Celotex. The 1960s exterior pebbledash was chipped away by hand and the poor stone underneath prepared for recovering. Materials that could be salvaged – including sandstone flags and timbers – were reused.

In conjunction with this, the builders dug the foundations for the extension and built 100mm dense double skin block walls, filled with 250mm insulation and tied with Teplo wall ties which improve the U-value of masonry walls by removing the thermal bridges created by stainless steel ties.

The farmhouse roof slates were removed and some of the timbers replaced, before the slates were cleaned and put back on. To ensure a continuous appearance along the extension Tom and Anna used slates of a similar age from a barn next to the house (replacing the barn roof with tin) and bought a further five tons of reclaimed slates to complete the job.

‘The roofers worked in freezing conditions during one of the harshest winters of recent years,’ said Anna. ‘In the end the build had to be put on hold for six weeks because the roads became impassable.’

Further exterior works included a new septic tank and soak away and the removal of the telegraph pole – at great expense – which was so close to the extension that it would have spoilt the view. A wind turbine was erected in a nearby field and commissioned before the build began, generating more electricity than the family consumes. ‘We included a lot of eco-aspects into the project which pay for themselves,’ said Tom. ‘It’s much easier to include these things from the start than try to fit them retrospectively.’ 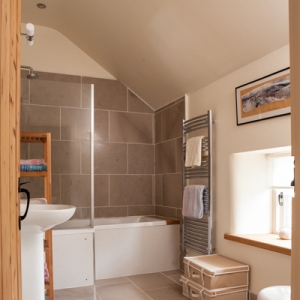 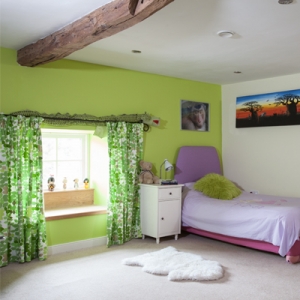 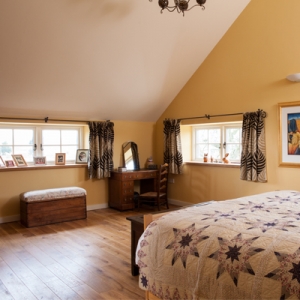 Their ‘eco-bling’ – as they refer to it – includes a 6kw Proven wind turbine, 18 photovoltaic solar panels which give a maximum output of 4kw; a Tatano Kalorina log/pellet/cereal boiler; a rain water harvesting system in which water from the house and barn roofs is stored in an underground tank and pumped back to the house when required, a Puraflow bio-system septic tank and two hot water solar panels.

Meanwhile, the photovoltaics produced 6401 kwh in 16 months.  At 41.3p / kwh this worked out at £2,643 FIT income and £96 in export, a total of £2,739. ‘The FITS for PV are guaranteed for 25 years which would give us £51,356 total income over 25 years.  The panels cost us £17,000 installed including the scaffolding costs.’ The photovoltaics are proving to be a better investment than the turbine at the moment but if we have a few stormy winters the turbine’s production could catch up,’ says Tom.

With the building water tight, attention turned to the interior, including electrics and plumbing, windows and doors, and plastering throughout. For minimal extra cost the windows were triple glazed throughout. Steel RSJs in the double story extension were manoeuvred into position using ropes and pulleys and supported at the corner with a steel pillar so that the ground floor could remain open into the single story wrap-around. The new timber beams are made with five-year air dried oak.

‘A couple of times I was jolted awake in the middle night by the load cracking of the timbers,’ said Anna. ‘They sounded like gunshots – but Tom managed to sleep through them both.’

Timber and slate tiles for the floors were bought locally then Anna made use of the scaffolding hired for the plasterer to decorate the entire house single-handedly. ‘I painted every wall three times, sealed or painted the woodwork three times and sealed the floors,’ said Anna. ‘It was hard work but rewarding. You hear a lot of disastrous stories about renovations and new builds but we can honestly say we enjoyed the whole process. It was stressful at times, but there were no dramas. We planned everything meticulously and saved money where we could, but there was no time pressure and we had a brilliant team around us. People said it would have been easier to demolish the house and start again, and perhaps it would, but we wanted to keep the essence of the old place. That was the point of this. We kept the layout of the family farmhouse in tact but carried a lot of its character into the new section, so it was renovation and new build side by side. As a result we have the best of both worlds.’