We took possession of a completely dilapidated wing of an old tearoom and hotel in Runswick Bay in the North Yorkshire Moors National Park on the beach 8 miles north of Whitby. We have carried out a self build conversion in to create a second Eco Arc design studio and beach house for holiday letting.

‘As an impulse buy, the dilapidated old property leaning against the cold North-Easterly winds in Runswick Bay could have been a disaster

‘I had always assumed that we would split the property vertically into two, each with three storeys,’ said Andrew. ‘Then a friend came along to see it and suggested we split it horizontally into three, and from that moment on it all fell into place. We would let out two and keep one to use ourselves.’

Until 1953 the property had been used as a hotel with a tearoom and was a focal point in the tiny coastal village, set on a hillside directly overlooking the sea near Whitby.

It was this view across the bay, which ‘sold’ it to Andrew and Lucy. ‘Everything felt completely right,’ said Andrew. ‘I love this part of the country. In my teens I used to come to Runswick Bay, sleep on the beach in a tent, have a swim and eat fish and chips. I think of it as my spiritual home – my idea of Heaven. But it was a very spontaneous purchase. We were actually looking for a house in Cumbria and couldn’t find anything, then Lucy spotted this place for sale and, within a week, we’d bought it.’ 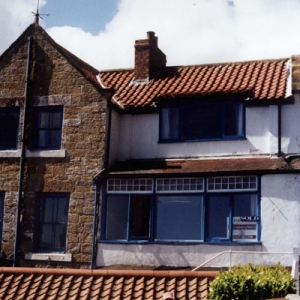 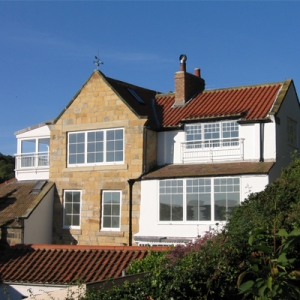 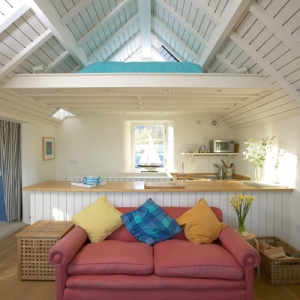 Andrew and Lucy renovated the property as a single project, which Lucy managed by traveling from their home near York, with baby Iona, on a regular 80-mile round trip. ‘It was quite a feat,’ said Andrew. ‘She would feed Iona in the back of the car and then organise 10 builders to move a wall.’

The building was in a poor state of neglect. It hadn’t been touched for decades and wood chip wallpaper seemed to be literally holding the plaster in place on the walls. All the internal hardwood doors needed to come out, the windows were virtually rotten and the floors were stuck with lino.

Andrew and Lucy initially stripped the property back to a shell, hiring a farm labourer and his uncle to work on site. They demolished the interior with sledge hammers and removed all the rubbish – which had to be barrowed along a narrow path and up a set of steep steps – in the back of a transit van. ‘It was the biggest vehicle we could get up the narrow road to the back of the house,’ said Andrew. Rubble from an outside bathroom, which was also knocked down, was taken off-site in similar fashion and a decked area pulled apart because it was rotten.

With the building open and bare, apart from the load bearing walls, Andrew and Lucy could begin to rebuild the property in a way which made the most of its prominent cliff-side position and glorious views. They knew that by rebuilding most of the internal walls they could create the three individual properties they wanted, and still meet the planners’ approval.

‘It took about eight months to get planning permission, but during that time we were doing all the demolition work so it tied in quite well,’ said Andrew. ‘I have to say that the planners in the North York Moors National Park Authority were fantastic. They could see that we were going to transform the place for the better.’

The lowest levels were tanked but the section reserved for Andrew and Lucy’s own use incorporates two former bedrooms knocked into one large living area. An outside balcony was also incorporated into this open plan room and Argon-filled double glazed to create a south-facing, all-year-round sun-trap. 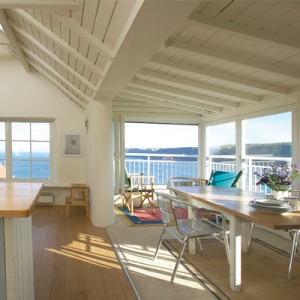 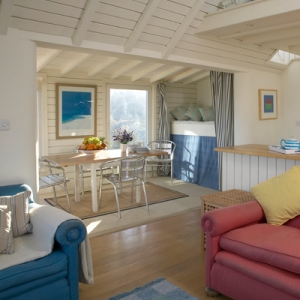 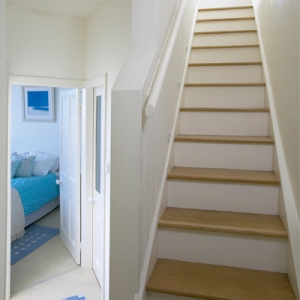 ‘We wanted a completely glazed wrap-around, but this wasn’t allowed – although we could have a glazed corner with roof lights, bi-fold doors and railings,’ said Andrew. ‘We changed things as we went along, rather than stick to a grand plan. The challenges came with the detail. It didn’t help that none of the walls in the building were straight.’ In fact one internal wall had to be rebuilt three times before Andrew and Lucy were happy with it.

‘We wanted to build a wall between the children’s bedroom and our own, so that there was enough room for bunk beds in one and a double bed in the other – but space was really tight,’ said Andrew. ‘We couldn’t achieve what we wanted with a straight, vertical wall, so it had to go in on a lean, following the slant of the window. The room is now like a vertical wedge

‘We boarded the ceiling to emphasise the coastal location,’ said Andrew. ‘We bought the cheapest, rough sawn white wood, lightly sanded it to remove the coarseness then white-washed them in Farrow & Ball Pointing. We left gaps between the boards to create shadows.’

With the basic structure completed, Andrew and Lucy concentrated on the details – a galley kitchen, a timber mezzanine sleeping area, a secret bunk bed and a steep staircase, which opens into the living area and instant views across the sea.

‘We keep it as uncluttered as possible so everything focuses on the beach hut look inside and the fabulous view beyond,’ said Andrew. ‘We rent it out in the summer months, between May and September, but in the winter we keep it for ourselves and come up here as much as we can. In stormy weather you feel as though you are on the bow of a ship with the rain lashing down and the waves pounding below, and on a sunny day we open up the windows and soak up the heat in the privacy of our own space. It certainly has the potential to move your spirit, just by being here. For me, it’s as good as it gets.”