Karen and Ian had spent five years looking for building land when they finally heard about a prime village plot on the outskirts of Melrose in the Scottish Borders. The picturesque location, which came with planning consent for a large, unusually-shaped house, was just what they were after. There was the added bonus of extra land for their horses, plus a small dwelling they nicknamed ‘the cave’ which meant they could live on site while the house was being built.

‘We built our last house as a project and in the course of building it we discovered I was expecting Jack,’ says Karen. ‘As a result, we lived there for six years before we decided to sell it and build the family home we really wanted.’ The existing planning consent on the plot was for a house which was far too big for their needs and over-sized in relation to surrounding properties. ‘We wanted something smaller, less complicated and very eco-friendly,’ says Karen. ‘We had to go to planning and effectively start again, but the fact that it was smaller and more in keeping with surrounding properties worked in its favour.’There were no objections, but the head of planning was adamant that the house had to be parallel with the boundary.

The new look house has been designed by Andrew Yeats of Ecoarc, whose vision of a carbon neutral house was closely aligned to Karen and Ian’s ambition to create a family home for the future. 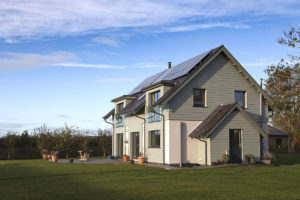 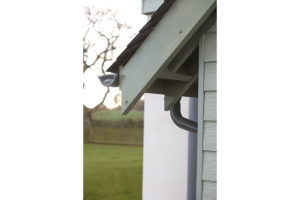 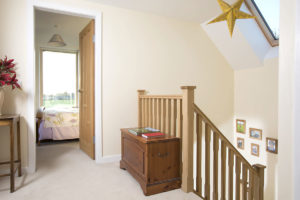 ‘The roof ridge is lower than the previous approved scheme and the foot print is considerably smaller, being more appropriate for the scale of the site and more in keeping with adjoining neighbours’ properties,’ said Andrew. ‘The house faces almost due south, to maximize passive solar gain and allow the house to function as a Passivhaus, with a mechanical ventilation heat recovery system providing heating / ventilation and a small wood-burning stove for back up. This orientation also ensures that thermal and PV solar panels will operate at optimal efficiency throughout the year – further reducing the carbon footprint of the house.’
Andrew was also committed to designing a Passive House within Karen and Ian’s budget of £200,000. ‘We wanted to prove that we could build an affordable passive house and demonstrate to others that it’s a viable way forward for future self-builders,’ says Karen. ‘Ian was quite sceptical at first – we had built three houses before this but I wanted to go for a passive house and was prepared to take on the project management myself to achieve it.’

After selling their last house in 2011, Karen, Ian and their two children moved lock, stock and barrel into ‘the cave’ – effectively a very large garage with a small kitchen and a shower room – so they could build at their own pace. ‘It was cheaper than moving into a rented house and more comfortable than a static caravan,’ says Karen. The ‘cave’ already had under floor heating and they insulated the garage doors, to make very small but cosy home. ‘ It made us realise that you don’t really need a lot of space or possessions to live comfortably – although we hadn’t envisaged living there for four and a half years.’

Before the build started, Ian and Karen built a barn, not only as a shelter for their horses but also to provide a dry storage area for building materials. Then they asked Andrew Devenney, (Transition Joinery) who had been on Strathclyde University’s passivhaus course, to take their new project on board. ‘He was ‘air tightness champion’ and really understood what we wanted to achieve. We pulled together a team of local trades people who were prepared to get involved and up for the challenge,’ says Karen. ‘Ian and I got stuck in where we could. Ian did more of the physical work, including the ground works which were his domain, while I was more involved in project management. I spent hours in on the phone and computer getting the best deals for materials.’

The concrete foundations, layered with Visqueen and an Eco-membrane slip sheet, was finished in concrete slab to take the main thermal breezeblock structure, strengthened with basalt wall ties and all the 300mm insulation was installed by Karen and Ian to ensure it was completely airtight.
The walls are a substantial half a meter thick and the roof is insulated with a further 600mm layer of insulation. Any gaps, however small, were sealed ‘with green gunk and airtight tape’ to prevent any leakage.

‘It went everywhere you can think of,’ says Karen. ‘Wherever there was a hole or the tiniest gap, out came the gunk and tape. There are no air leaks anywhere. At our initial meeting, Ian and I suggested having geothermal heating but Andrew Yeats said ‘Why do you need it?’ and he was absolutely right. The house maintains a steady temperature all year round thanks to its airtightness, solar gain and heat recovery system. Once the temperature is up, it stays up and the MVHR is constantly refreshing the air, so it’s never stale or damp inside.’ With the combination of free solar power, feed-in tariffs for the 14 solar panels and RHI payments for two solar thermal panels heating the hot water, the house alone costs around £100 per annum in electricity.

‘There were no big disasters during the build but it was hard work, especially on top of our jobs and looking after the children,’ says Karen. ‘We often had to be creative when problems arose – fortunately I like problem solving – and we had Andrew as a back up if we didn’t know or understand anything. We followed his plans to the letter. Sometimes things seemed counter-intuitive, but you have to do it anyway and then it falls into place. If you can maintain the principles of airtightness (and avoid cold-bridging) you have the basis of the whole house.’ 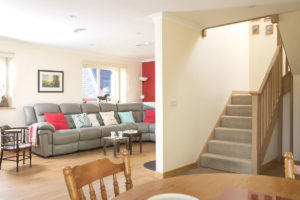 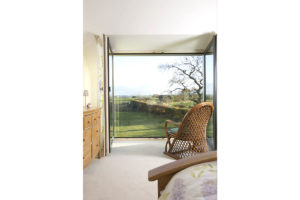 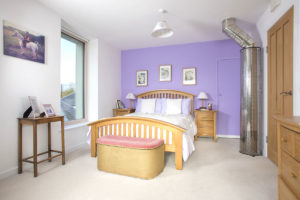 The attention to detail wasn’t confined to the internal build finishes – the exterior is also completed to a high standard and designed to fit seamlessly into the local landscape. To this end, the external walls are covered with Marley Eternit Cedral fibre cement weather boarding on treated battens. Karen and Ian initially considered a tiled roof but were strongly advised by planners to have slate in keeping with neighbouring buildings.

‘Having the barn for storage was a huge bonus because we could buy in bulk and save money in the process,’ says Karen. Choosing the ‘right’ staircase was also a challenge. There was originally a window designed to be on the landing wall and the staircase was chosen with that in mind however the window ‘morphed’ into a roof light. Changing to a winder staircase would have allowed an additional 300mm in the width of the living area and allowed the stove flue to pass through the wall and up through the stairwell. However the bigger staircase is spacious and the flue goes straight up through the main bedroom, where it creates a striking architectural feature – as well as boosting the bedroom temperature in very cold weather.

‘We are still getting used to living in our new home,’ says Karen. ‘After living in ‘the cave’ for so long we couldn’t believe how much space we had in the house. Even though it’s compact we have everything we could possibly need and the views are just amazing. They are one of the reasons we are delighted to have so much glass in the south-facing elevation. We wake up in the morning and look straight out onto the hills on two sides.’ There are still finishing touches to be done – including a brise-soleil, an architectural structure which reduces intense heat gain by deflecting sunlight, which they hope to build in the spring. They have built a polytunnel and created paths around the house, but the garden is in the process of being landscaped and the cave is due to be converted into a holiday let. 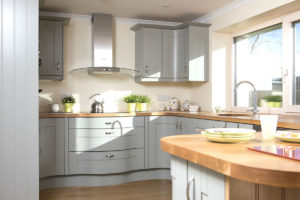 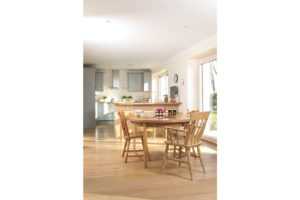 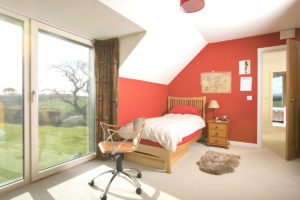 ‘One of the most impressive things about the house, however, is it’s constant and efficient heat, and in the near future I will finish off the last few items of the paperwork for our Passivhaus certification’ says Karen. ‘It’s achieved everything Andrew said it would, thanks to his attention to detail and intricate calculations – which even included the heat emanating from ourselves and the dogs. That’s how finely tuned it is to our lifestyle. It does what it says on the tin.’

• Find an architect who understands your goals and is prepared to discuss the build as it progresses, especially if there are elements of the design that seem counter-intuitive. ‘There was always a very good reason for doing things in the way Andrew Yeats outlined,’ says Karen.

• A true Passivhaus maintains a steady temperature throughout the year and does not require any other heating, apart from a small log burner for back up during extremely cold weather.

• Spend more on things which are permanent and consider the long term future of the house. If you invest in the key build materials the house should last 100 years or more.

• Keep an eye on the budget, shop around, compromise on things you can change later and buy in bulk where possible. We had a limited contingency plan for finances, but with careful spending we came in on budget. 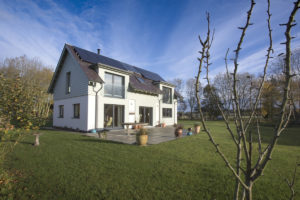 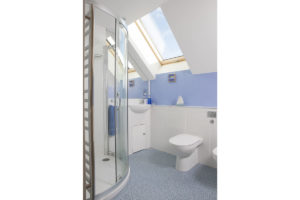 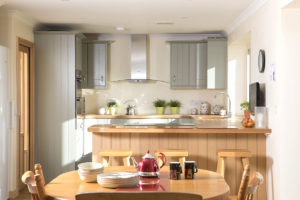