When Penny Roberts’ daughters flew the nest, she and her husband Norman were left ‘rattling around’ the old seven-bedroom Victorian house in Liverpool, where they had lived for 20 years. ‘We felt we were wasting rooms, energy and heating,’ says Penny. ‘We were very keen to live somewhere which was smaller, greener, and designed around our new lifestyle, and building our own house seemed like the best option.’

So when a 50-year-old bungalow next door came up for sale, they couldn’t believe their luck. ‘We love the street and know our neighbours, so the location was perfect,’ says Penny ‘The bungalow stood in half an acre of land, which we divided in half. We then had to get planning permission to build a new house on the quarter-acre plot. It meant we could live in the bungalow, rather than a caravan, on site. We were down-sizing, so it freed up some capital and we could also sell the bungalow once the new place was built.’

Penny and Norman chose architects Maggie Pickles and Andrew Yeats of Eco Arc to design their house with their eco-specialist advice. ‘We chose our second design in about two minutes flat,’ says Penny. ‘Andrew Yeats, from Ecoarc, insisted that we had the site cleared. He introduced us to two geomancers who worked out the ley lines and performed a clearing ceremony on site and a ritual for the new house. I am a Kinesiologist so I wanted the house to have a good atmosphere.’ 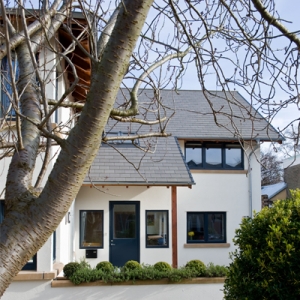 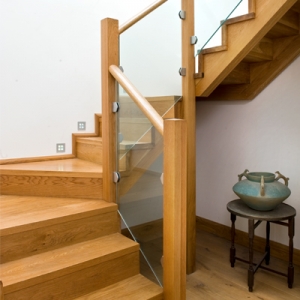 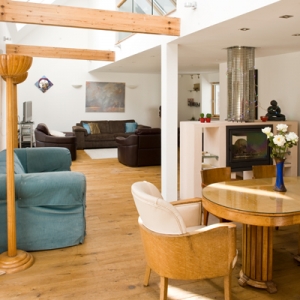 Planning permission was straight forward, but Penny considers herself very lucky. The house sits in a conservation area and plans were passed before the current moratorium, restricting new developments, was enforced. ‘The planning department are generally very supportive of progressive designs and as this was in a private Victorian Park, high quality build was their only criteria,’ says Penny, ‘But if we had applied to build this house now we would have never have got permission. We were fortunate to get in at the right time.’

With initiation ceremonies out the way, and the ‘feel-good factors’ assured, the next challenge was to find contractors who could build the house, complete with eco features, within their budget. We looked at a timber frame company called Maple, who provided a site project manager. It was more economical than hiring a contractor, and we had control over decision making and design.’

Penny and Norman were particularly keen to source materials themselves, trawling the internet and building shows to find the best deals and the most advanced products for their budget. ‘Saving energy and water and using reconstituted products were an important part of the build,’ says Penny. ‘We also wanted to achieve comfort, personal aesthetics and a feeling of spaciousness, so there have been some compromises to get the best of both worlds.’ 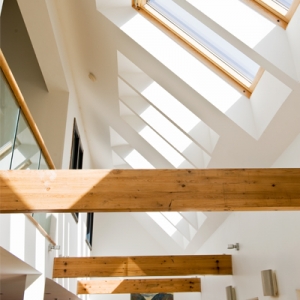 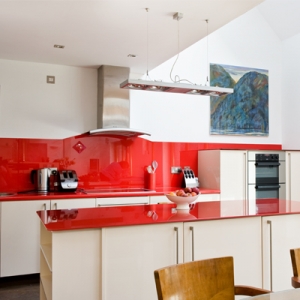 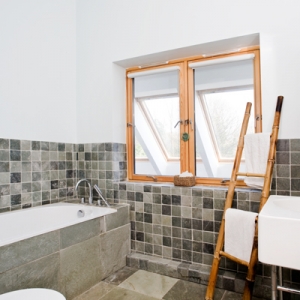 Included in their eco-wish-list were geothermal heating, an air recovery system (‘This was a priority as we visited many eco-houses which were too hot upstairs, so we were keen to have fresh air throughout,’ says Penny), a rain harvesting system, smart technology lighting and insulation made of recycled newspaper.

They also wanted the timber frame to be sourced from sustainable forests, argon-filled windows, solar panels, maintenance free aluminium window frames and reconstituted slate roof tiles. ‘I spent hours and hours finding just what we wanted,’ says Penny. ‘I became very good at finding the best bargains. I was also conscious that nothing should go to waste. I am from a mother who used to wash kitchen foil and hang it out to dry, so the whole idea of conserving and reusing is in-built.’

Penny adopted the role of site manager. Before the build could begin, they had to knock down an old garage and pavilion belonging to the bungalow, and adapt a wall with their next door neighbours once this was done.

‘I wanted to build the house quite high so we could see the River Mersey – which flows past the end of the road – from upstairs,’ says Penny. ‘Making the inside and outside work as one was very important to me, I also wanted the whole house to be used. We had far too many bedrooms in the Victorian place – who needs seven? This was going to be the complete opposite of what we had before.’

‘Having Maple Timber Frame was excellent because of the experienced people they brought to the job, particularly the ground-worker and the man who actually built the house in two weeks,’ says Penny. ‘It was much cheaper than having a contractor.

The house is super insulated using recycled newspaper to create a dense, heat retaining system. The rainwater harvesting system stores and recycles rainwater for the washing machine, toilets and garden, while a geothermal heating system uses heat from a metre below ground level and passes it through a heat exchanger system to warm the house. Water-based underfloor heating serves as a back-up for the coldest days, while double glazed, argon-filled windows reduce heat-loss through the glass. A Smart Technology lighting system uses less electricity than standard lights, and even the external render has a colour lifespan of 20 years to eliminate the need for regular repainting.

‘My only thought is, why didn’t we do this sooner? When I think back to life in the Victorian house, which was lovely in its own way, there is just no comparison. It wasted so much energy,’ says Penny. ‘This house is efficient, every inch of space is used and it always feels light and open, even on a dull day, which lifts the spirits.’