This project is Zero Co2 home built to Passive House levels of super insulation, triple glazing, air-tightness, & passive solar gain, with the benefit of a wind turbine to export excess renewable energy back to the grid. Heating is via a ground source heat pump and a biomass wood stove.

The biggest influence in the building’s design was the sun and the view. Anyone who enters the house through the front door is instantly drawn into a floor-to-ceiling glazed atrium which has breath-taking views across the shores of a lake, flanked by rolling moorland. The skies are huge and the light changes minute by minute.

The whole house has been designed by Cumbrian-based architects Ecoarc to absorb this landscape, with all the main living spaces facing onto it.

The house evolved on the site of a detached goat shed which was demolished to make way for the new build. Most of the stone was re-used in a garden wall. The first set of plans were passed by South Lanarkshire Council without a hitch, including an independent 9kw wind turbine which make the house carbon neutral.

The timber frame and block construction was relatively straight forward and the house includes a water-based underfloor heating system as well as a water tank rigged up to a NIBE ground source heat pump. A wood burning stove, surrounded by soap stone to distribute the heat more slowly, as well as the solar energy drawn through the huge argon filled windows, keep energy costs to a minimum.

‘The old farmhouse used to cost a fortune in heating, lighting and cooking,’ said Sally. ‘The running costs in this house are around 90% less, even though the two properties are roughly the same size. It’s a huge difference.’ 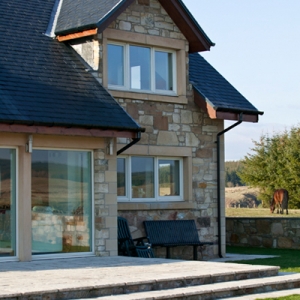 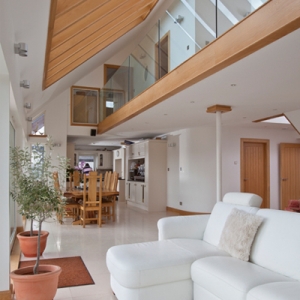 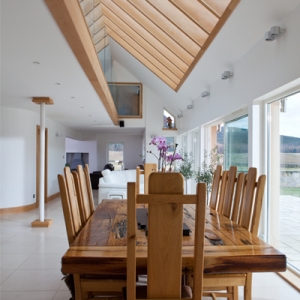 The low running costs helped to off-set the final spend. In spite of their initial misgivings, other family members Chris, Josh and Jamie think the new house is amazing and, although they can still see the old farmhouse from the windows, they have no regrets about moving into a modern eco-home.

‘I think we all appreciate the light and space, and the fantastic views,’ said Sally. ‘It’s an uplifting house to live in. When the build got really tough I would sit in the middle of the floor with a glass of wine, look out at the view and remind myself that this was the focus. It’s been an extraordinary journey with plenty of highs and lows, but every day contained something great. Something exciting. Considering I had never done anything like this, on this scale, I think it’s a great achievement by everyone involved.’ 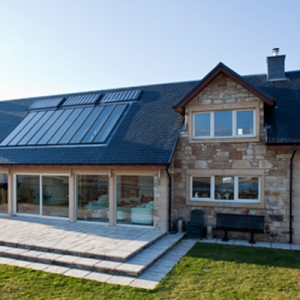 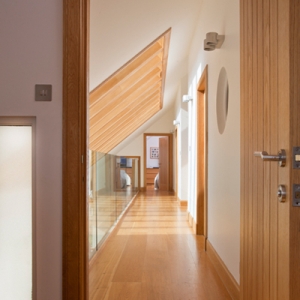 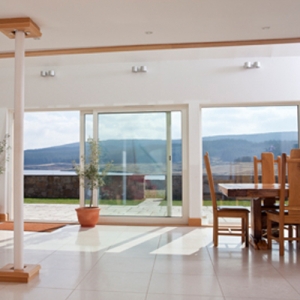