When Penny Horner opens the glass doors that connect her bedroom with the balcony outside, she is often taken by surprise.  She says, ‘Because of all the glass in this house, I feel as if I am actually in the landscape. I don’t feel like I am inside at all.    So sometimes when I open the door and feel a blast of cold air coming in, I realise that it is, in fact, cold outside.’

Penny Horner and her two daughters chose the most westerly point of mainland Britain as the site for their new family home.   They had been looking for some land on the west coast of Scotland for some time when Penny discovered a plot on the peninsula of Ardnamurchan,    She says, ‘As soon as I stood on it, I felt it was just perfect.  It is right next to the sea, overlooking the Sound of Mull and it is just a very inspiring spot.’

When it came to finding an architect, Penny did most of her research online and there was one particular practice which caught her attention.  She says, ‘In the end Andrew Yeats of Eco Arc really stood out.  He has designed a number of spiritual buildings, such as Buddhist spaces which are absolutely beautiful.  I wanted this to be more than just a house; it was to be a house with something special that had beautiful spaces and connected with the landscape.’ 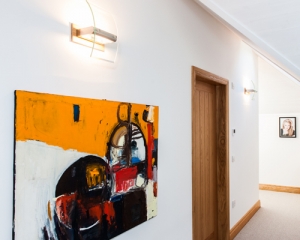 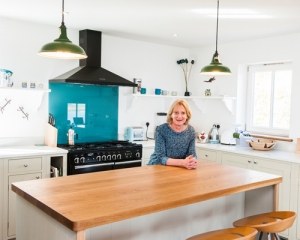 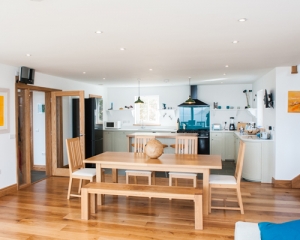 On the outside, the house is quite traditional looking.  It has whitewashed walls and a slate roof. Penny had considered going for a stone structure with a turf roof but the site is highly visible to passengers on the ferry that goes back and forwards to the Isle of Mull.  So there were planning considerations and it was reckoned that the new- build should fit in with the surrounding buildings.

Originally Penny had wanted to dig down into the hillside and create a basement for storing kayaks and perhaps a car and a boat.  The planners rejected this idea stating that it would make the house too conspicuous.  In the end the decision was taken to build a large shed in the garden.  It is a smaller space than the original basement would have been but it provides an ideal site for the photo voltaic solar panels.

When it came to creating the interior layout, there were a number of key considerations.  It had to suit all three owners and it had to be conducive to feelings of calm and sanctuary.   In order to ensure that was the case, the architect kicked off a comprehensive consultation process.  Penny says, ‘Andrew asked myself and my two daughters to all give an interpretation of what sort of feelings we were looking for.  So we all did that independently and he received three envelopes, each with very different things in them.’

Elder daughter Laura drew a picture of a couple walking down a beach. Her focus is very much on the outdoors which is unsurprising given that she is a scuba diving instructor whose work takes her all over the world. Olivia, who has just completed a degree in fashion design in Brighton, is more inspired by urban surroundings.  She depicted brick buildings that were reminiscent of those in the south of England where the family was based for many years.  Her drawings illustrated her concern with aesthetically appealing proportions. In the end, Olivia had a lot of input into the choice of colour for the kitchen and in the tiling while Laura took an interest in choosing the bathrooms.

Penny’s wishes were very much informed by previous family houses.  She says, ‘We used to live in a 17th century thatched stone cottage and I loved the coolness of that house in summer and the warmth in winter.  Then we moved to a modern Scandinavian type house and I loved the light and the air and that, along with the planning considerations, is probably what swayed me.’

The architect was also presented with a fairly exacting, practical brief.  Penny says, ‘I wanted the heart of the house to be an open plan kitchen, dining and seating area because we are very much into food as a family.  And I felt it was important to make use of the views, so it would be an outward looking house.  I also wanted a boot room because we spend a lot of time outside and it’s good to have somewhere to put muddy or wet stuff when you’ve been outside on the hills or in the water.’

All these specifications have been implemented to stunning effect.   The house is airy and open inside and looks out on panoramic sea views.  However, on the ground floor, there is also a small, enclosed sitting- room, complete with wood burning stove.  Penny says, ‘We wanted a snug; a little space which is warm and cosy for reading and film watching and for hiding away when the weather is not for being out in.’

Upstairs, all 3 bedrooms are of similar dimensions.  Penny explains, ‘So many modern houses have a huge master bedroom and two or three smaller, non- descript bedrooms for children.  That is not what we wanted.  My girls are adults now so our rooms are fairly equal in size and we didn’t go for en-suites. Instead, we have two bathrooms which are for sharing’.

Energy efficiency and eco-technology were also high on the family’s agenda.  This has been achieved with the incorporation of a ground source heat pump which works alongside the solar panels.  A wood burning stove in the open plan area. as well as the one in the snug adds atmosphere and supplementary heat.

During the actual construction process, Penny was based in Edinburgh but she made site visits on a weekly or fortnightly basis to see how things were going and to make decisions. She also made full use of modern technology in order to confer with her daughters about fixtures and fittings.    However, the bulk of the project management responsibilities rested with local builder Kenneth MacDonald who proved to be extremely reliable and efficient throughout.  He also made a point of working closely with the architect, seeking his advice when necessary. 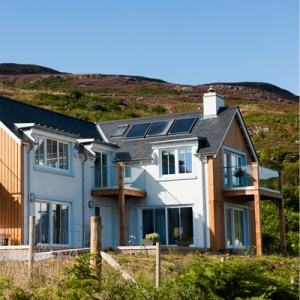 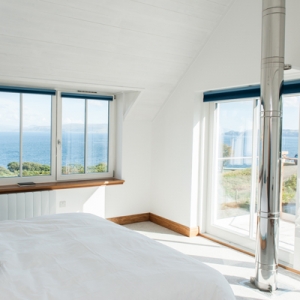 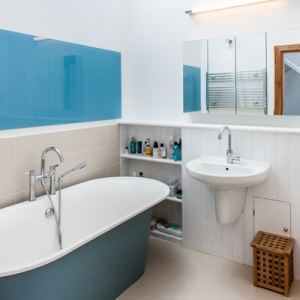 Things went well, apart from a slight difficulty encountered during the ground works stage.  Penny said, ‘We had carried out ground tests on site prior to buying the plot to see if there were any problems.  These came out fine but when digging started the machines hit dirty, yellow and blue clay.  It was totally unexpected because it is all rock around here.  The design of the foundations had to be completely changed.’

Another local tradesman was responsible for the solar panels and ground source heat pump.  The Electrician has also proved to be a real asset and has contributed to the project’s success.  Penny says, ‘I still email him or phone him if I have any problems but the system actually works really well. It’s early days yet and I’ve only had two bills but it seems to be cheap to run.’

Meanwhile, Penny is delighted with the way the architect has implemented her family’s wishes. She says, ‘A lot of the high-tech projects I’ve seen are cold and lack soul.  Andrew’s work is so different.  He creates interesting designs that demonstrate a good use of space.  By doing that and using lots of wood, he has created a home which goes beyond the clean cut lines of a very modern house.  It has a sort of lived in feel and a spiritual dimension.’

Whilst she is clearly happy with her new home, Penny does not envisage going on to create another property.  She says, ‘For me building was a means to an end in terms of getting a lovely house.’

Since moving in, daily life has taken on a pleasing rhythm.  Penny has just finished planting a herb garden and she begins each day with a yoga session in her bedroom or on its balcony from where the wonderful hilltop views help nurture feelings of relaxation and wellbeing.

It is also a house which can take whatever the weather throws at it.  Penny says, ‘I like being able to open the blinds in the morning and look out over the Sound of Mull.  When the weather is atrocious I can light the wood burner. It is against the glass so I have all the weather behind it.  I like the fact that I feel safe, when the walls are being buffeted by the wind outside.’

In the original brief Penny specified that she wanted some sort of circularity in the staircase.   The finished design is helical and it is constructed in oak.  It was made off site and then transferred to the peninsula. Penny says, ‘It has got a special place in the house.  It comes of the kitchen and my desk is next to it, overlooking the water.  This provides me with a cosy space to write in.’

The builder suggested installing a high tech German kitchen but that was at the opposite end of the spectrum from what Penny wanted.  She says, ‘A long time before the girls were born, I had a kitchen made for me by a carpenter.  It was built from oak and sycamore and I always had that look in mind.  So we went for a painted timber kitchen.  It’s by Neptune and is finished in a sort of soft, greenie, grey colour.’