This project is a net exporter of renewable energy and is built to Passive House levels of super insulation, triple glazing, air-tightness, passive solar gain and thermal mass, with the benefit of a fully integrated solar thermal hot water & photovoltaic panel roof array. Heating is via a ground source heat pump and a biomass wood stove. Mechanical heat recovery ventilation system guarantees pre warmed clean fresh air and a wind turbine fully powers the owners all electrical car. An extensive Polly tunnel allows for most of the home vegetable produce to be grown on site.

Rosalyne and Ian Harland’s house is said to be unlike any other in the UK. Their aim was to build a property of such high eco-spec that they could reduce running costs to an absolute minimum or even produce a surplus.

‘Oil prices were soaring and our old house next door, where we lived for nearly 20 years, cost a fortune in fuel,’ said Ian. ‘Current building regulations do not encourage people to build environmentally-friendly homes but if change is going to come, as it will have to, it must start at the top and filter down.’

Finding a plot for the house, which has become a modern-day icon of design, technology and energy efficiency, was the easy part: they owned 33 acres of land which included a former mushroom farm in the field next to their house near Ramsey on the Isle of Man.

‘We had lived in our old house for nearly 20 years so we divided our land into two and applied for outline planning permission for a four bedroom house, bearing in mind this was virtually a brown field site because it contained the concrete bases for the old mushroom tunnels,’ said Ian.

The couple knew it wasn’t going to be a smooth ride. Development is tightly controlled by what is now known as the Department of Infrastructure on the island (formerly the Department of Local Government and the Environment), but the Harlands had excellent local advice with knowledge of the site and the local climate – all crucial factors when building an eco-house. In particular, the site had an open southern aspect, a high water table for the ground source heat pump, and a sandy river bed at the bottom of the garden which would be ideal for sewerage treatment through a leach bed system. It wasn’t enough to convince the local authority. The application was turned down at both the planning and review stages, reaching appeal before it was finally given the go-ahead thanks to the influence of ‘a far-sighted environmental minister’. Even then they would have to apply for further permission for gates, walls and any other additional developments – including a wind turbine. But the Harlands were in no rush.

‘It was our first self-build and we had no time constraint, so we agreed that we would take it one step at a time,’ said Ian. ‘I project managed the whole process on the basis that there would be no more than two trades on site at any one time. That way we would have time to examine the minute details along the way.’

The house was to be built as a post and beam construction using a green oak timber frame that accommodates a German triple-glazed curtain walling system. Anodised and powder coated aluminium would be used along with local Manx stone and cut Yorkshire stone to produce a maintenance-free exterior, and the roof would comprise 42 photovoltaic panels. The Harlands spent months researching the technologies available before they even started to draw up detailed plans. 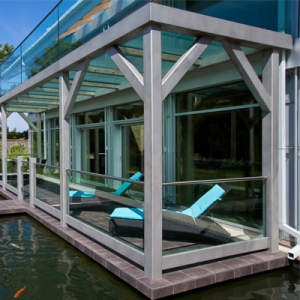 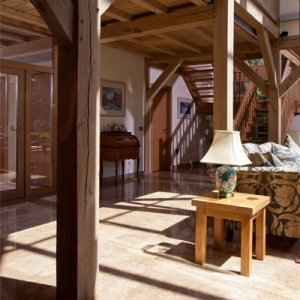 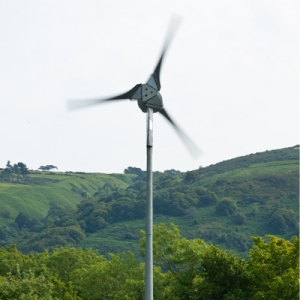 ‘We even went to Scandinavia and Germany to see what they are building over there,’ said Ian. ‘These countries are light years ahead of us. It is second nature to them.’ By the time they met eco-architect Andrew Yeats they had a clear idea of the standards they wanted to achieve and asked him to design a house which had all the benefits of the high-tech eco-houses abroad while taking into account the unique climate of the Isle of Man.

For the architect, insulation was priority. The foundations are capped with insulating Thermalite block, the walls contain 200mm high density polystyrene insulation, the roof is insulated with 300mm of sheep’s wool and the floor has 300mm of polystyrene underneath. Dense concrete block is used inside the insulation to create a thermal mass inside so the temperature of the house moves very slowly. He even specified Danish plastic wall ties to stop any possibility of cold bridging through the walls. 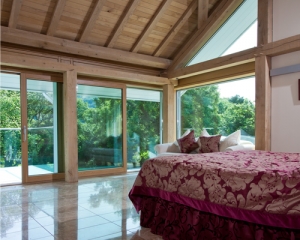 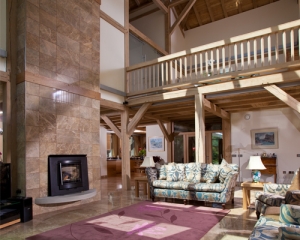 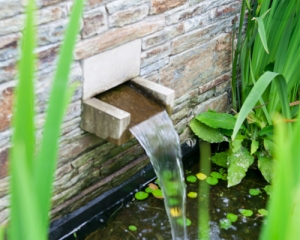 ‘We used to run a business so we are both practical people,’ said Rosalyne. ‘Although it was our first build, we were never daunted by anything, we just applied common sense. For example, we didn’t want to have to paint anything outside, so how would we do it? In the end we realised we could have frame built of oak inside and anodised aluminium outside. We didn’t want to live in a white box. We wanted the house to have character and an organic influence.’

One of the biggest challenges was getting the materials to site. Although Rosalyne and Ian wanted to use island-based trades people and suppliers where possible, they were also prepared to ferry in materials – and skilled crafts people – to achieve the high quality they were after.

To make it more appealing for those travelling long distances, Ian and Rosalyne offered accommodation to those who were literally prepared to go the extra mile. In the meantime, Ian found himself learning new skills to keep the process moving – including driving a JCB. ‘It’s the best piece of kit I’ve ever had,’ said Ian. ‘I’ve never enjoyed driving anything so much. It was the key to everything: We dug holes with it, carried glass with it and moved trees with it. It was invaluable.’

Once the foundations were laid it took six days for the green oak and sweet chestnut frame to be constructed ready for the roof covering. Apart from the south-facing glazed atrium space, the Welsh slate section of the roof was on in time for Rosalyne and Ian to sit on there and watch the Manx Grand Prix, which passes close to the house.

While the block work was going up, the open south facing elevation was protected with a temporary wood frame and plastic wall.

The glazing, sourced from a small German company, had to be measured to the millimetre and Ian has nothing but praise for the supplier. ‘They were brilliant,’ he says. ‘They spent a week measuring it, then they turned up in a van which was the dog’s dinner – you could have built anything from the back of it. They were here for months.’

But the time spent getting crucial details right was time well spent. Ian and Rosalyne have a house which is unique and built with the future in mind.

‘As a society faced with soaring oil prices we should be moving forward, not looking backwards,’ says Ian. The house is not only visually striking, with its photovoltaic panels, glass and aluminium, but also a flagship of energy efficiency.

A 6Kw Proven wind turbine sited 300m away in an open field is net metered to the MEA grid along with the photovoltaic array. The system allows any surplus energy generated to be sold back to the national grid. If not enough is produced, power can be purchased from the MEA, all automatically controlled by a smart electrical meter. ‘So far, we have produced way more electrical energy than we have used’, says Ian. 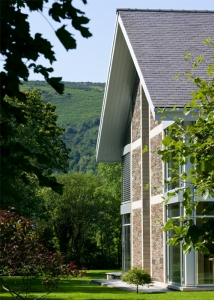 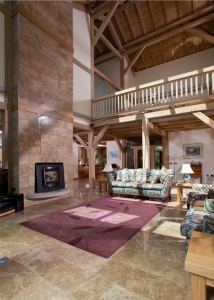 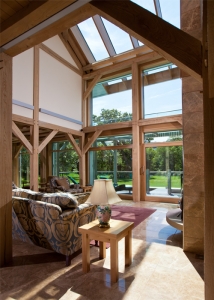 To use the energy as efficiently as possible, a 10KW Stiebel Eltron heat-pump is the basis of the heating system for the domestic hot water, underfloor heating and air-exchange system, when there is not enough solar heat from the four panels on the roof. ‘A heat-pump, which does the job of a traditional boiler, should be thought of as an amplifier, or like a fridge in reverse’ says Ian. ‘A well designed ground source heat-pump should produce a coefficient of performance (COP) of around 5:1. This means for every 1Kwh of electrical power used 5Kwh of heat is produced â€” so something for nothing.’ NOTE: Heat pumps are most efficient at 30-33C output temperature. Traditional boilers are designed to run between 50 and 60C. Consequently, old systems designed for boilers are no good for heat pump operation. An example is underfloor heating designed for a heat pump at 33C will have three times as much pipework in the floor as a boiler system designed at 60C.

A large collector is required to do this and Curlew House has nearly 1Km of pipe buried 1.5 metres down in a wet field, although air or vertical bore hole collectors can be installed by those with limited outside space.

The house also has an integrated air exchange system whereby fresh air is sucked into the house across a heat exchanger that uses the exhaust air to heat up the incoming fresh air. So far, the house has lived up to all expectations – and more. ‘We really enjoyed the research because we discovered the amazing technology that is out there, and the potential for housing in the future,’ says Rosalyne. ‘We are passionate about the environment and we hope that what we have done here at Curlew House will inspire others to think about ways in which they can be more energy efficient.’