This project is an eco renovation of a dilapidated bungalow in The North York Moors National Park to form a stunning 2 storey eco house with a bio-diverse sedum roof and natural local stone walls, combined with a contemporary modern interior with a wood burning stove fuelled from timber on site, supplying the under floor heating

Jayne and Ian Gordon couldn’t believe their luck when a cold, damp bungalow surrounded by towering Leylandi came up for sale. ‘The bungalow was very ordinary but the location was absolutely fantastic,’ says Jayne. ‘We had always wanted to build our own house so we took a huge risk and bought it, not knowing whether we would get planning permission.’

The 1960s bungalow was set low in a hillside garden and beyond the Leylandi were stunning views across miles of National Parkland. The property had stood empty for a year as one prospective buyer after another shied away from the challenging hillside location and potential planning constraints.

‘It wasn’t somewhere you could develop and make a lot of money on, but we didn’t want it to make a profit. This was to be our home and we knew we would never find another location quite like it,’ says Jayne. Yet before committing to the sale, she took one fortuitous precautionary measure. 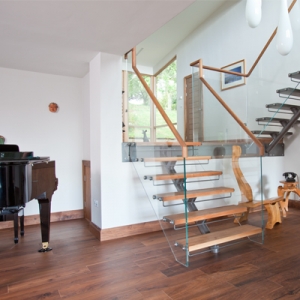 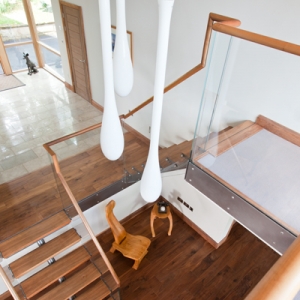 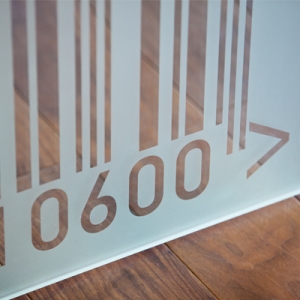 ‘I emailed the planning authority to find out whether we could turn the existing windows into one big wall of glass, because that would be the key element of anything we did.’ Fortunately, the fact that there was already a lot of glazing on the southern aspect went in their favour and before long Ian and Jayne had sold their seven bedroom period house in nearby Stokesley and moved into the bungalow. Although they realised they wouldn’t be able to knock down the bungalow and start again, they had already started to plan a major remodel of the property which would focus on the glorious view.

‘We lived in the bungalow for a year so we could get used to the way we would live in it and the way the light works,’ says Jayne. ‘We gave the architect Eco Arc an idea of what we wanted in terms of light and space and included a sedum roof, which ultimately helped with the planning application.’

Their preparation, research and willingness to work with the National Parks Authority paid off and the plans were passed first time. A number of eco aspects were built into the design, including the use of reclaimed build materials; photo-voltaic solar panels; argon-filled windows, high insulation; installation of trunking for a domestic wind turbine (subject to planning), and a double-sided wood burning stove with a back boiler.

‘We considered having a ground source heat pump but the running costs were quite high, and a wood chip biomass boiler would have worked if we had had outbuildings in which to install the boiler and hopper,’ said Ian. ‘The wood burning stove proved to be the best option for us because we have our own wood, which can be ecologically managed.’ The stove provides most of the heating for the house, including masses of hot water which, in turn, supplies the under floor heating.

The layout of the interior changed beyond all recognition as the bungalow was virtually dismantled and rebuilt. The main aim was to exchange smaller room for large open living areas and conventional windows for a wall of glass. To achieve this, steel beams extend right across the width of the main living space, interrupted only by the supporting chimney breast, to open up the living area. The entrance hall has been extended to include a glass and timber staircase and the study, with its barcoded glass doors, is directly off the sitting area so that Ian can work at the computer without feeling cut off from the family.

‘We wanted a sociable, flexible house in which all the rooms were used, and where the outside was as much a part of our lifestyle as the inside,’ says Jayne. ‘The views here are amazing and in many ways the house takes second place to the space outside.’ 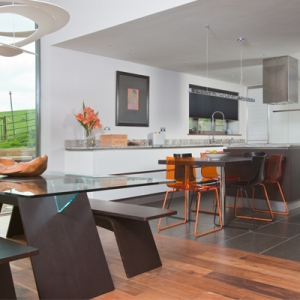 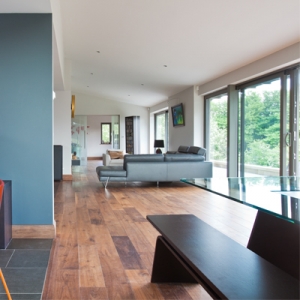 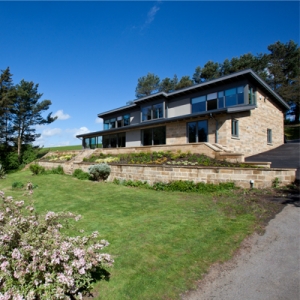 ‘We are in it for the long term and wanted to get everything right from the outset,’ says Jayne. ‘The property is virtually unrecognisable from the original bungalow. Some walls had to change and we dug down to use the space under the garage, but were not allowed to knock down the old building and start again. It would have been easier if we had, and we wouldn’t have had to pay VAT, but it would have set a precedent for the rest of the National Park. As it turned out we have a house which has fulfilled everything we wanted and more. I wake up in the morning and have to pinch myself to make sure it’s real.’

Points of Interest re the Sedum Roof

The property is built on a hill in National Parkland and the planning department didn’t want the roof line to be raised beyond that of the original bungalow. The Gordons wanted to create more living space and considered building down to basement level, but they were advised that it would be too expensive. They also asked whether they could knock the bungalow down and start again, but the National Parks Authority refused to allow it because it would ‘set a precedent’. In the end they managed to get round the issue by building up to the line of the bungalow chimney and squaring off the building without developing beyond the existing outline.

Jayne and Ian wanted a sedum roof to help the large expanse blend into the scenery as well as for its eco elements. Sedum roofs create a great habitat for small creatures such as beetles and spiders, and provide food for butterflies, bees and seed-eating birds.

Sedum also creates its own insulation system and saves on fuel bills. Research has found that the temperature under the membrane of a green roof in summer is 15 degs C below the temperature of a standard roof. In winter, it is 4.5 degrees warmer than under a standard roof. It also insulates against noise – often reducing the effect of noise by 50 per cent inside the building.

A green roof also acts as a natural water filter, removing pollutants and absorbing up to 80% of rainfall, before releasing it slowly. This reduces pressure on drainage systems. If well maintained, a living roof also improves air quality as CO2 is absorbed by the plants, while dust and pollutants are filtered out.