This project is built to Passive House levels of superior insulation, triple glazing, air-tightness and with the benefit of passive solar gain, thermal mass and a solar thermal hot water renewable system.

Alison Poole literally followed in her grandmother’s footsteps when she built a house on a Cumbrian hillside, close to the sea. By the time Alison inherited the two-bedroom property 20 years ago it was looking tired and dated, comprising four small rooms that were unsuitable for the demands of 20th century living. The new design would focus on light, space, the beautiful Lakeland views – and a big family eating area.

‘Over the years we’ve had a lot of family events here so I wanted the new house to include an area where there was enough room for everyone to sit around a large table at mealtimes,’ says Alison. ‘I also wanted to make better use of the sloping site, the lovely light up here and the views over open countryside, without compromising the streetscape.’ 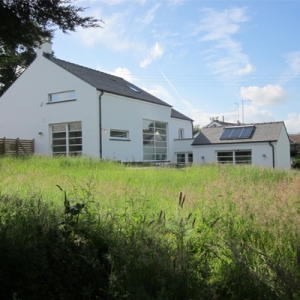 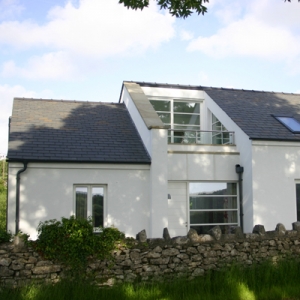 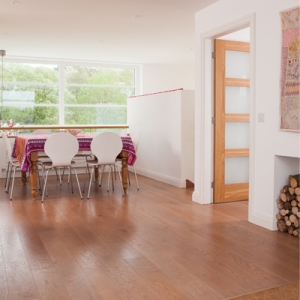 Alison and Jason held a number of pre-application meetings with South Lakeland Planning Authority to discuss her proposals in depth, and to agree a basis for the design before submitting her detailed plans. Alison had already improved her parents’ neighbouring house and her environmentally sympathetic approach helped to smooth the route to planning consent.

‘I wanted to create a modern, eco- friendly cottage which was in keeping with both the streetscape and local vernacular but which also adhered to the design guidelines set out in South Lakeland’s Local Plan and Supplementary Planning Documents.

It was Alison’s first domestic self-build and she wanted to ensure that all bases were well covered before she began. Alison also brought on board a project architect, Andrew Yeats from Eco Arc, who, prepared construction details, wrote the detailed specification and who helped run the project on site.

It was with mixed emotions that the house built by her grandmother was finally demolished – following an asbestos survey which revealed nothing untoward. Although a significant element of family history was being torn down, Alison was excited by the fact that four years of planning and dreaming was finally coming to fruition.

The build was relatively straight forward. The low bedrock level led to the replacement of proposed raft foundations with stepped mass concrete and slab foundations.

Once the foundations were laid, the walls shot up within four weeks, comprising 200mm of insulation sandwiched between two layers of concrete block secured with eco-ties. The super structure was simple but the two architects – Alison and Andrew – added various elements to upgrade its eco-values, including Argon filled triple glazing, high quantities of insulation, a solar hot water system and insulation tape to make the house as air tight as possible. 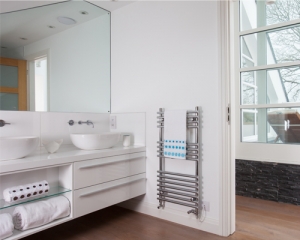 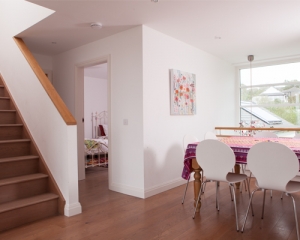 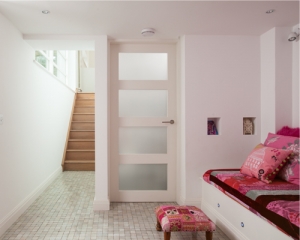 The solar hot water has been fantastic – I get a lot of satisfaction from it – it was only on rare occasions that the boiler was switched on last summer – and the highest water temperature I have seen on the controls was 70 degrees in early July 2014.’

The kerbside appeal was a key factor in the design. The Burlington slate roof is in keeping with the village and the stone render reflects the style of many Lakeland houses, but there was a danger that the house could look too bulky and imposing in its setting. To avoid this, a balcony was designed to break up the front elevation and horizontal style windows used to stretch the visual effect lengthways.

‘By the time we started the build we had a very good idea of what it would cost, including a contingency fund if we needed it. We couldn’t emphasise enough the value of having an outline cost plan and then a detailed specification, and a bill of quantities.’

Landscaping also played a key role in the success of the build. Although Alison had done very little landscaping, she wanted the areas close to the house to be structurally-based, sloping away to the natural garden at the back. Natural materials such as timber, setts from a local quarry and large feature stones eventually formed the basis of the formally designed areas.

‘It must be every Architect’s dream to build their own house and I still pinch myself that I have been lucky enough to do it. I loved doing the project myself and being able to design everything, inside and out, to our own spec and design,’ says Alison. ‘I was usually working on much larger developments to a commercially led brief, in which I was required to work to exacting  space standards, whereas with this I could do what I wanted. It gave me a great sense of freedom. I could allow the spaces to flow together without restrictions. I had the luxury of thinking time so I could mull things over and work out exactly what I wanted from the house.’

Andrew’s & Alison’s attention to detail not only paid off for the immediate family, but also her parents who completely admire their daughter’s design, and the neighbours who have given their seal of approval to a property which works so sympathetically with its surroundings.

‘I love the fact that we are all so close together and that we can continue the family tradition of living in the village,’ says Alison, who is helping her brother renovate a bungalow he has also inherited on the family ‘site’.

‘One of my favourite views from the house is from our bedroom window. I can see my parents’ house and the window into the room where my father was born. It brings the story of our lives here full circle.’

But there is one more element to the build which is not quite complete. Alison’s grandmother was called Norah Helm and the house will be called Ellanorah in her memory.  ‘It is also the Aboriginal word for ‘a home by the sea”, says Alison. ‘I like to think that she would approve of the house and be proud of the inspirational legacy she left me.’