Brantwood is an estate of approximately 100 hectares on the east side of Coniston water. It comprises a group of two Grade II* and three Grade II listed buildings; gardens, woodland and agricultural land with two stone outbuildings or hog-houses. The significance of the estate and its buildings is primarily in the cultural associations arising from John Ruskin’s tenure there from 1872 – 1900.

Since 2011 Eco Arc have been The Ruskin Foundation & Brantwood Trust’s retained architects and we have under take a series of projects including designs for 6 projects on the estate as listed below. 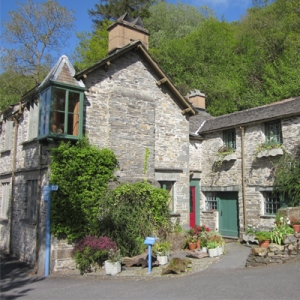 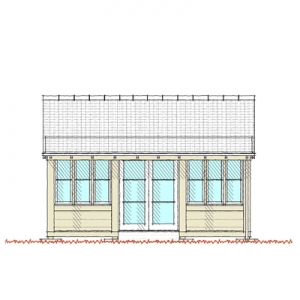 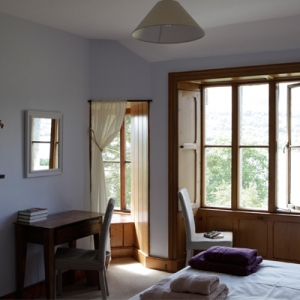 The main house has its origins circa 1797, but has undergone substantial alteration inside and out, reflecting the history of its domestic occupants and its subsequent life as an education centre and museum.

External changes to the original eighteenth century cottage took place over a period of just over 100 years. The last major changes to the exterior form of the building were made circa 1905. The exterior is, therefore, largely as Ruskin knew it at the time of his death (1900). In recent years the external appearance of the house at this date has been further restored with the re-colouring of the render and restoration of trelliswork.

Internally, substantial changes have taken place throughout the life of the building in response to the needs of its occupants and subsequent use as a museum and centre of arts and environmental education.

In the last twenty years much refurbishment of the downstairs front rooms which Ruskin occupied has taken place and the house displays a large collection of his former possessions. The appearance of authenticity to the period of his occupancy is thus carefully preserved in five of the rooms most used by him, but overall the original interior has been so regularly altered or renovated in its past that change itself might be said to be the most authentic statement of the continuous life of the house.

The significance of the building, overall, is that it still presents the actual place in which Ruskin lived and worked, with the same largely unaltered views from the windows and with the same general layout, including two specific and highly visible architectural features designed and added by Ruskin: the turret and the dining room. Taken together with the presentation of the exceptional collection housed there, the experience of Brantwood for visitors is remarkably powerful.

The building is not generally considered to be architecturally distinguished, but whilst not aesthetically coherent its exterior nonetheless expresses its history very visibly and provides an important narrative of a period in the life of its most famous occupant. Because of Ruskin’s celebrity, Brantwood has become a site of international reputation and is visited by c.27,000 visitors a year.

Eco Arc received listed building consent and supervised the site building work to part refurbish the existing house and for new works to form director living accommodation. We are currently designing a accommodation for Ruskin’s Coach in a secure arch way enclosure under the main house.

The Lodge was commissioned by Ruskin in the early 1870’s and built to his specifications. The Lodge was attached to part of the earlier stables, the rest of which were demolished to make way for it. The two buildings now form a single unit. The exterior form of the Lodge is largely unaltered. Inside it underwent modifications in 1989, when an upper level connection between the two buildings was made. The Lodge is significant in representing one of the few surviving buildings built to the specifications of Ruskin, and in terms of its overall part in the history of Ruskin at Brantwood.

The Coach House was commissioned by Ruskin in the early 1880’s. It still largely retains its original exterior appearance, even though, following a fire in the 1980’s, part of the north end of it had to be rebuilt. The main exception, which is not generally visible to the public, is a kitchen extension to the south end made in 1995. The interior has undergone modification for its use as a cafÃ© restaurant, some surviving features, including part of the stable flooring, stalls and feeding troughs have been kept or adapted for use. The upstairs loft is currently a retail space. The building’s significance is in its largely unaltered external appearance, completing the surviving picture of Brantwood at the time of Ruskin’s death.

The land at Brantwood has a more ancient history than the buildings, and is significant for its surviving ancient semi natural woodland, including ancient small-leafed limes; charcoal-burning pit-steads; a bark peelers hut; and medieval bloomeries. The estate represents a significant example of the medieval and pre-industrial economy of the region with links to the history of early mining in the valley (especially the Coniston Old Man, which it faces). It also has significant surviving structures and landscaping created by Ruskin, notably terraced gardens; reservoirs and water management systems; a fish pond; a harbour and a stone seat known as ‘Ruskin’s seat’. 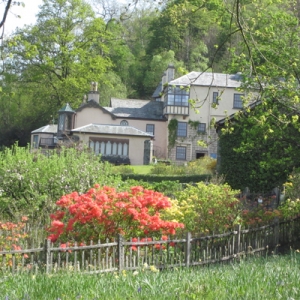 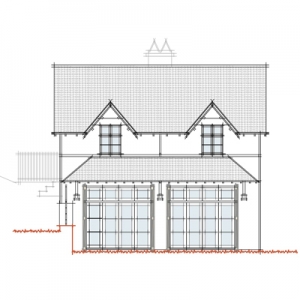